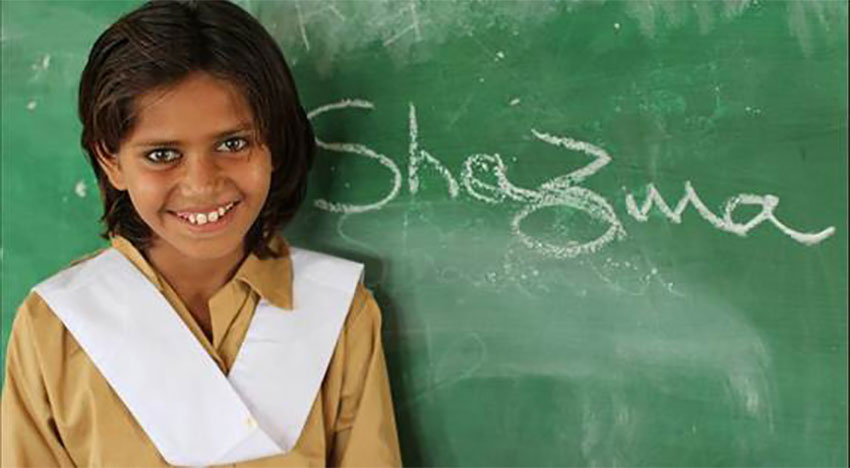 SHAZMA’S SMILE: THE NEW FACE OF EDUCATION IN PAKISTAN

The Citizens Foundation (TCF) is celebrating reaching its goal of 1000 schools across Pakistan. As a result of their work THIS is the face of the future for girls in some of the world’s most impoverished communities.

Shazma never dreamed of going to school. Her mother thought educating her was “useless.” It was enough that her brother should go to class so he could support the family.

Her gender tied her to a cycle of poverty she had no hope of escaping.

But the new TCF schools being built in Pakistan’s urban slums and poverty-stricken rural neighbourhoods insisted that girls had every bit as much right as boys to a quality education.

As a result, Shazma’s parents were persuaded to allow the little girl to go to school with her brother.

Now 8, she is top of her class and dreams of becoming a teacher.

Shazma is just one of 145,000 Pakistani children now attending these ground-breaking schools in 97 cities and towns in Pakistan’s poorest areas.

What began as just five schools in Karachi in 1995 has reached, 1000 this month, a milestone few people ever thought TCF – the non-profit organization behind Pakistan’s quiet education revolution – stood a chance of achieving, particularly as a considerable number of the schools are in regions heavily influenced by the fiercely fundamentalist Taliban.

They said it couldn’t be done. How could private citizens succeed where the government had failed? It would be too expensive, too ambitious. Parents would never allow their daughters to attend schools with boys.

But the doubters were proved wrong.

In each of the 1,000 TCF schools, every teacher, every principal, is a woman, a policy the founders insisted upon so that parents would feel more comfortable about sending their daughters to lessons. Every classroom strives to hold as many girls as boys.

Despite her tough upbringing in the town of Dadu in the Sindh province, Shazma is one of the lucky ones.

There are more than 240,000 public schools in Pakistan, many of them so badly run they don’t even have toilets or electricity let alone desks and computers. In many of them, the “ghost” teachers don’t bother showing up. Consequently neither do the kids.

TCF schools boast clean, working toilets. They have fresh drinking water. They have electricity. There are books and computers and teachers who believe in their pupils.

Perhaps better than all of those things, these children have the opportunity – the only one they are ever likely to get – to drag themselves out of the cycle of work and despair that is all that many of their parents have ever known.

Education can do that.

1,000 schools may only be a start – but the milestone offers a very real hope for girls, for the disadvantaged, for the invisible victims the world fails to see when it thinks of Pakistan.