Around the World in 30 Days 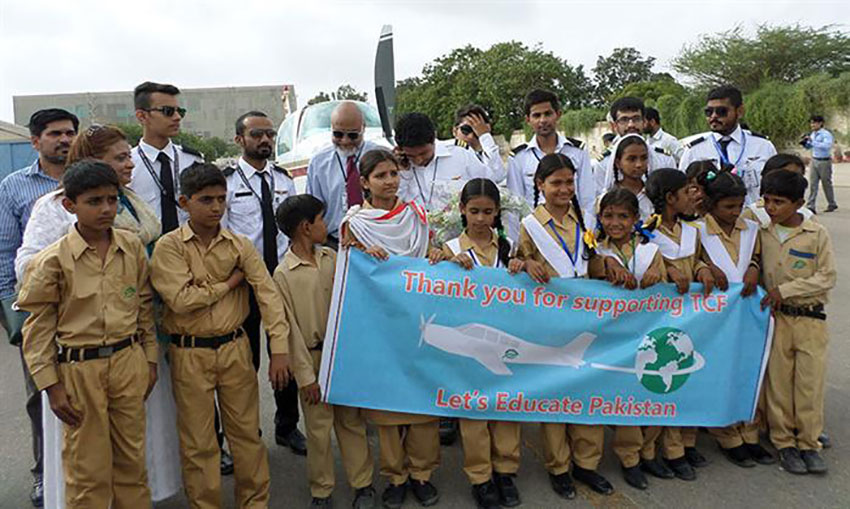 Published in Dawn
They are not Phileas Fogg and Passepartout, but just like Jules Verne’s characters young Pakistani American Haris Suleman and his father Babar Suleman have set out to travel around the world in … wait for it … 30 days! And that too … wait for it … in a single-engine plane! The plane is being piloted by Haris, who is only 17 years old. Last year, 19-year-old pilot Ryan Campbell from Australian became the youngest person to fly a single-engine plane around the world in 70 days. But Ryan flew solo. Haris has with him his dad, Babar Suleman, therefore he comes under a different category. Still, kids Haris’s age can’t even apply for a driver’s licence in Pakistan and here is this fellow landing here in his plane. “Well, I only got my private pilot’s license a month and half ago. Though I have been flying with my dad since I was little I could only apply for a private pilot’s license in America after my 17th birthday and after logging 50 hours of flight. And even now I am too young to fly in many countries of the world,” he shares. Haris is not doing this for the records. “I am doing this to raise US $1 million for The Citizen’s Foundation schools. I am associated with a TCF chapter in Indiana called Seeds of Learning. On my plane there is a list of donors, too. We have already raised half a million and hope to reach our target by the end of our journey,” he said. There were three, four and five students there to receive them at the airport. For some reason, one little girl was under the impression that Haris and his father were old TCF boys. Haris’s father Babar Suleman, who hails from a family of pilots and also happens to be the younger brother of former Chief of Air Staff Air Marshall (retd) Rao Qamar Suleman, said that he also has an older son and daughter who don’t fly. “Haris is his youngest and he takes after me,” he said proudly. About their journey, the senior pilot said that they had been talking about it off and on for the past three years now. “And in January this year we just thought we should do it,” But with the decision also came some worries, well, from the women in the house. Haris’s grandmother was worried that Haris might go to sleep while flying. “My mother at first thought that we were going on a world tour by traveling on commercial planes. But after realisation dawned, she commanded me to make Haris drink pots full of coffee so that he won’t fall asleep while flying,” the father laughed. “And my mother,” Haris added, “well, she worries if I have enough clean clothes. If I haven’t forgotten anything behind in some city or the other.” “But my class fellows back in Plainfield, Indiana, are excited. They are following our journey through our blog: http://flyaroundtheworldin30days.com/, too,” said Haris. Asked if he has experienced any close calls or scary moments in the journey so far, Haris said that it had to be while flying over the ocean. “Single-engine planes aren’t really for ocean voyages but we took special emergency training for that. Also we had to wear heavy suits that are also very warm while flying over the ocean,” he explained. About 60 per cent of the trip is over huge expanses of water including the Atlantic, Pacific and parts of Indian Ocean. And does flying and training disturb his other interests and activities? “Well, I play soccer which I have not had the time for recently. Also I’m missing the FIFA World Cup,” he replied. And what about studies? “I’m doing this for education. My own education could have been disturbed plenty, only I won’t let it happen,” said the high school junior. The father-son duo visited Canada, Iceland, England, Greece, Egypt and UAE before landing in Karachi. After Pakistan they will be heading to Bangladesh, Indonesia, Australia, Fiji, American Samoa, Kiribati, Hawaii and California, USA.
Read more: http://www.dawn.com/news/1116328/around-the-world-in-30-days