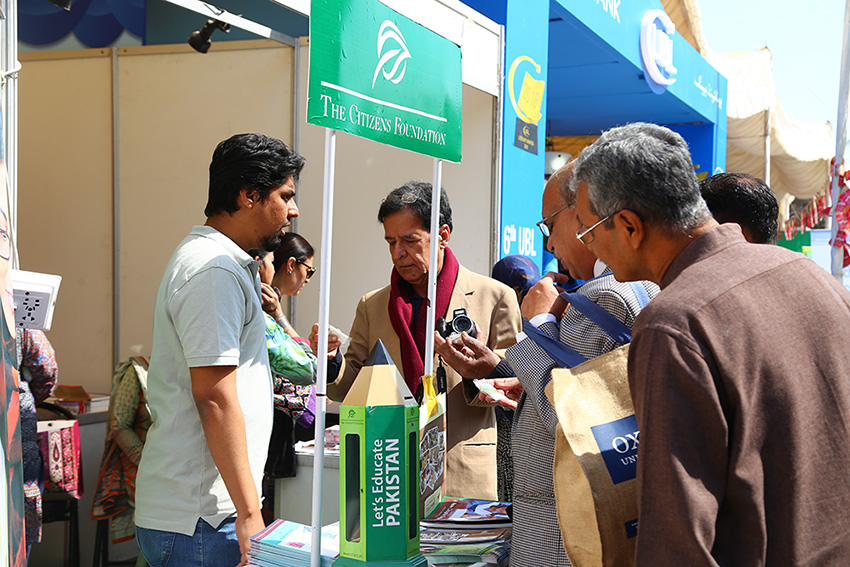 This year, TCF partnered with the Karachi Literature Festival (KLF), which held its 8th edition in February. Recognising a congruence between the event and its own mission to educate, TCF set up a stall to reach out to authors, panelists and intellectuals in attendance. Here, employees engaged with guests and disseminated information pertaining to the organisation and its various initiatives. A lively photo booth was also set up where supporters had their photos taken and recorded videos of support which were shared on TCF’s social media platforms.

The stall captured the interest of participants and delegates alike, many of whom also pledged to support the foundation’s mission for education and social change. Among these was Bobby Sager, a leading American businessman and philanthropist, who has been an avid supporter and has financed one of TCF’s Teacher Training Centres in Mansehra. He was joined by Mr. Raza Rabbani, Senator and a key political figure, Mr. Junaid Iqbal, CEO, Careem and prominent social activist and lawyer Mr. Jibran Nasir. Notable journalists Mr. Zarrar Khuhro and Mr. Mubashir Zaidi pledged their support for TCF’s Classroom Campaign, one of the many products which donors can opt for through the organisation’s website (www.tcf.org.pk). Senior artists and writers, Zia Moheyeddin, Azra Moheyeddin and Omer Shahid Hamid also interacted with the TCF team.

It is heartening to note that KLF is playing an increasingly important role in reviving the love of books and intellectual inquiry. Bringing notable authors, thinkers and policy makers on one platform, KLF serves as a forum for the public to engage with them and participate in the discourse around important socio-economic issues of our times. We, at TCF, believe that such initiatives truly complement formal education and help shape a better informed and tolerant society.