Like ancient ruins re-inhabited by its erstwhile settlers, awakened from their slumber, the Government Primary School in Theh Rosa is abuzz with the sounds of excited children and teachers intent on making up for lost time.

Deep in the heart of Tehsil Kot Radha Kishan, District Kasur, lies the tiny village of Theh Rosa – population: 1,500. Beyond the handful of village shops lining the dusty streets, the main source of sustenance for the village continues to be farming and livestock. An endless vista of golden wheat with the occasional smattering of vegetable patches greet the occasional visitor and tell a story of lives lived deeply connected with the land and with the divine rewards of one’s labour. Judging by the wall-to-wall display of dung patties and the neighbourly chatter exchanged across low, trusting walls, one would imagine that not much has changed in this village over the decades. Just a few hundred metres down the village dirt track, however, in the ramshackle building of the Government Boys Primary School, Theh Rosa, the early murmurings of a quiet revolution are clearly audible.

One enters the school with a sense of shock and despair at witnessing the state of the school building. The Government of Punjab’s School Basic Information website describes it as: ‘School Building: Existing; Building Condition: Dangerous’. While two rooms remain barely functional, the rest of the building is a wretched assortment of caved-in roofs, crumbling concrete walls and exposed, mangled metal. And yet, like ancient ruins re-inhabited by its erstwhile settlers, awakened from their slumber, the school in Theh Rosa is abuzz with the sounds of excited children and teachers intent on making up for lost time.

Last October, the boys primary school in Theh Rosa was on the list of the 1,000 worst-performing schools in the province selected by the Government of Punjab to be handed over to private sector management in an attempt to turn them around. In the space of a few months, the Government completed its selection of partners for the Punjab School Support Programme and by April 2016, TCF had hired the teachers, principals, administrative staff and management required to manage the 79 schools it had been entrusted with. TCF also triggered some basic repair and maintenance across its adopted schools and ordered additional furniture, but a lot more still needs to be done when and if the resources become available. 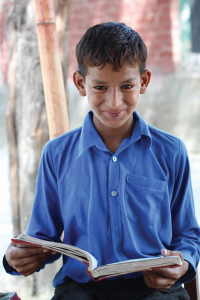 ‘This school used to be very different’, says Summran Talha, a tall Class 5 boy with bright eyes and a winning, shy smile. ‘The previous ‘Sir’ never used to teach us anything. The children would be fighting amongst themselves but the teachers would not be bothered. Sometimes it would be ‘Bachay (child)! Go get us some ‘barfi’ (sweet) to eat.’ Sometimes it would be ‘botal’ (soda) or fruits. When they would be done, they would say, ‘Let’s take a break’, and soon it would be time to go home. Now our teachers explain everything to us. There are times when I don’t understand, … but they tell us to ask them again and again if we need to. Everyone in the village says that the school provides good quality education now. They want to send their children here.’ Summran has dreams of being a soldier one day. He enjoys his English lessons the most and when asked, which subject he finds the most difficult, he breaks out of his usual shy demeanor and promptly replies: ‘Nothing!’

Summran’s teacher Miss Nargis is beaming as she looks at Summran conversing confidently. She can see the difference just a few months of proper schooling has made in Summran’s life. ‘He did have potential, but I can tell you, he hardly knew anything when we started our work.’ The ‘we’ in Miss Nargis’s discourse refers to her leader, the Principal and the four other teachers who joined the team assigned by TCF to this school in Theh Rosa as the academic year began in April 2016.

‘It was very difficult in the beginning’, she says. ‘There was no place to sit, no water to drink; … nothing! We put the broken furniture to one side and cleaned up the place ourselves. Village folks who visit are surprised to see the place now.’

‘When we joined, even the kids in Class 5 didn’t know in which direction they should read the numbers. They didn’t know their alphabet. It’s not their fault. If nobody taught them anything, how can they be expected to know anything? We felt that if we have been given this task, we must work on the foundations of their learning, no matter how much time has been lost. This is our future which was getting ruined. So we started slowly with counting and tables, then basic addition and subtraction. Even in Urdu, we had to start with joining letters together to form words. We are very happy that they are catching up very fast. I am very optimistic that we can give them a great future.’ 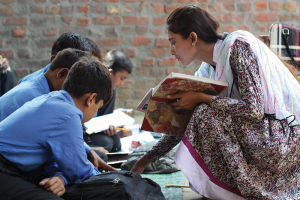 Miss Nargis used to teach at a private school in Kasur before joining TCF. ‘Although private schools pay this much as well but … there is some work that one develops a passion for’, she smiles. ‘Over there I just had to deliver results, but here I feel like I have a responsibility to these children. I want this school to be famous for its standard of education. It’s a challenge. We have to take this school somewhere.’

Outside, the wind picks up and turns the fields of wheat into a rolling sea of gold. The villagers of Theh Rosa know that nature shares its bounties only with those who put in the hard work when it is most needed. As they look towards the school, they have reason to believe that the village will receive bountiful harvests for many years to come.