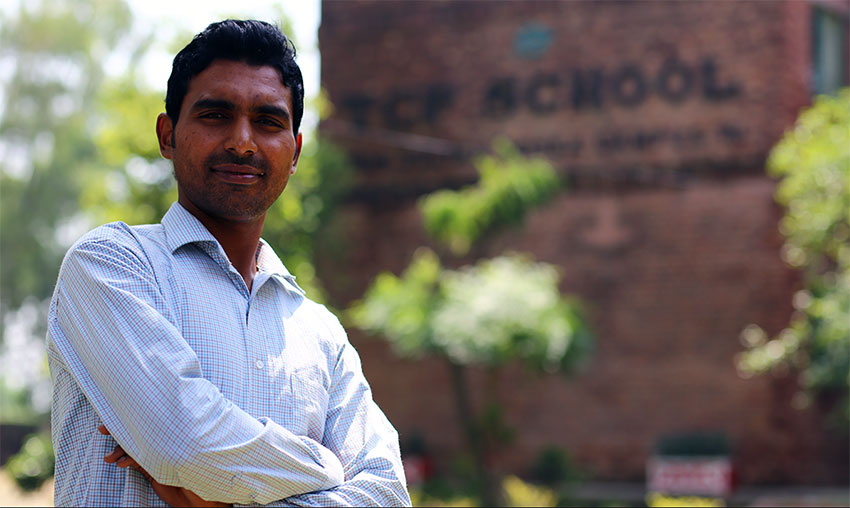 Surrounded by uncertainty when his father met an unfortunate accident, Wajid Ali’s story reflects a young man’s resilience in the face of adversity and his determination to find his own, unconventional path to success.

Wajid Ali’s home is nestled deep within lush green fields, 4 km from the Wagah border and close to his alma mater, TCF’s Al-Ghurair Campus. Upon approaching his house, one encounters a lanky young man bent over his wheat crop, almost reluctant to let go and engage with us for our scheduled interview. His cordial demeanour and firm handshake reflect the warmth and hospitality our hinterland is famous for. Dressed in jeans and a button down shirt, however, Wajid defies the stereotypical picture of a ‘farmer’ most of us visualise due to our social conditioning.

Wajid’s father is a farmer and an employee of the Pakistan Railways. He has 7 sisters and 2 brothers, all at various stages of schooling. At 26, Wajid is the eldest and contributes to the household income, along with his father. He makes a living through farming and selling his crop in the main vegetable markets of Lahore.

Dissatisfied with the quality of education imparted at the local government school, Wajid’s family enrolled him at TCF School in the 7th grade, after he completed his primary education. ‘We were aware of TCF’s high standard of education because the whole community spoke highly of the school’, says Wajid.

As he delves into a detailed discussion of his school, Wajid’s eyes beam with excitement and his tone picks up. ‘There was a marked difference in the syllabus and the approach to learning was much more engaging. It was so refreshing to be part of a learning environment which focused on real concepts and exploration as opposed to rote learning. Our school principal, Miss Rahila Nadeem inspired me as she always encouraged us to work hard, saying that education will take us far in life. She gave me the confidence and desire to follow my dreams.’

Clearing his Matriculation with flying colours in 2007, Wajid went on to the prestigious F.C. College, Lahore, from where he completed his Intermediate in 2009. This was when Wajid’s father met with an unfortunate accident. Bedridden and expected to be out of work for the next 6 months, these were uncertain and testing times for the family. As the eldest sibling, Wajid did not have the luxury to dwell upon his misfortune for too long. He had to be a pillar of strength for his mother and rest of the family and now had the added responsibility of running
the household.

Circumstances did not allow Wajid to pursue his B.Sc. in Economics, as he had planned, but they certainly did not deter him from pursuing his dreams of higher education. Wajid says, ’with my father on bed rest and out of work, I could not afford to go ahead with my plan but I still decided to do my B.Comwork in order to make up for the loss of cash flow over the next few months. My father had been a farmer in addition to his job; I now decided to take it up professionally as well. I would make a daily trip to Lahore’s main vegetable market to sell my crop, first thing in the morning and then go to my academy in the afternoon to prepare for my B.Com exams. I then came home in the evening to tend to my crops. This was my routine for two years.’

By the time Wajid completed his B.Com, he had spent two years farming commercially and had developed quite a fondness for his adopted trade; a devotion which is palpable when you observe him in the field among the crops. ‘At this point, although my father had recovered and resumed his job Alhamdulillah (Praise to God), I decided to continue with farming as I personally found it very satisfying, and it seemed that I could do the job well’, says Wajid, with a sheepish grin on his face.

His father’s gradual recovery also meant that Wajid could once again focus on higher education with renewed zeal. ‘My teachers at TCF instilled in me the appreciation and desire for constant learning and personal development; this approach has now become a part of my life.’ The next stop in Wajid’s educational journey was an M.Com from the University of Central Punjab, which he acquired in 2014.

Speaking about social perceptions of the value of farming and trades that involve any manual labour, Wajid says, ‘I have been asked often why I do not apply for a job considering I have invested so much into my education. But who says that the outcome of education or the meaning of success for that matter, has to be tied to a 9 to 5 job? I take great pride in the little enterprise I run which is rewarding, both financially and emotionally’.

With his education, however, Wajid is not like all the other farmers in his community. He has now hired a team of young people to assist him with his work. He intends to grow his venture by investing in innovative technologies to enhance crop yield. One of these which Wajid plans to implement soon, is the use of ‘tunnel farming techniques’ to counter seasonal constraints and enable the production of various crops all year round. ‘In this line of work you have to be very adept at matching supply with demand and I intend to do just that through innovation. Investing in this technique would help me increase both earnings and the yield on my relatively small plot of land.’

Wajid believes his education has played an instrumental role in equipping him with the skills to compete effectively in the market. ‘I have an understanding of the chemical composition of all major pesticides and treatments being used and have also learnt to carefully distinguish between the different types of medicine we use for the crop. This has helped me produce good quality crop, consistently’, informs Wajid. His efforts in the field are complemented by his strong negotiation skills with the wholesalers, enabling him to fetch competitive prices for his crop.

As we leave, we ask Wajid how he feels about where he is today: ‘I feel great! People in the community look up to me now. Upon seeing my progress, my relatives and others in the community are now motivated, more than ever before, to send their kids to school. It feels good to be in a position to inspire and help others; what more could I ask for?’