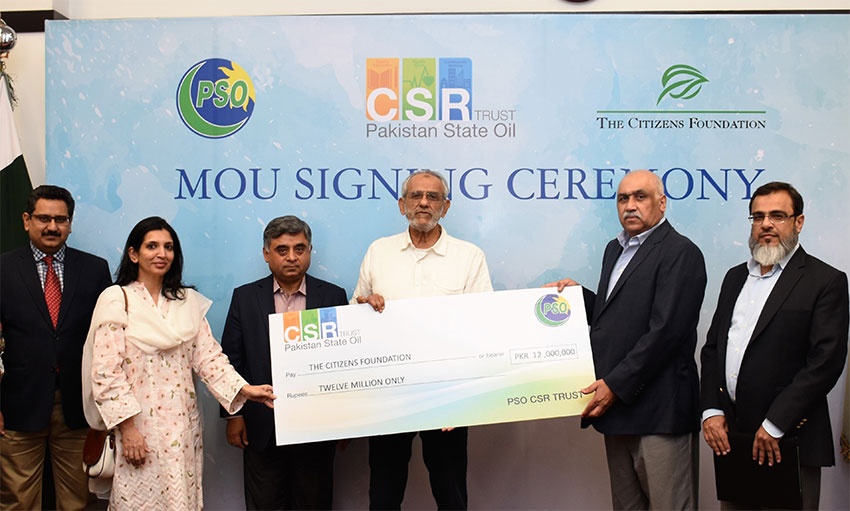 Pakistan State Oil Company Limited (PSO), the largest oil marketing company of Pakistan, has donated Rs 12 million to The Citizen’s Foundation (TCF), one of Pakistan’s leading not-for-profit in the education sector. The announcement came at a ceremony organized by PSO where MD and CEO PSO, Sheikh Imranul Haque, presented the cheque of support to the Co-founder TCF, Mr. Mushtaq Chhapra. Chairman, PSO CSR Trust, Mr. Yacoob Suttar was also present on the occasion with other officials from both organizations.
Pakistan continues to face an education emergency. Statistics suggest almost 44% (22.6 million) children between the age of 5 and 16 are out of school. PSO CSR Trust’s donation to TCF will ensure continued provision of education for deserving students from some of the most underprivileged backgrounds. Under the support agreed with TCF, PSO is adopting five TCF campuses, also constructed with PSO support, for a period of one year. Three out of five schools are located in areas hit by the terrible 2008’s earthquake.
Other than the above donation, PSO has also pledged construction of a TCF campus in one of the underdeveloped localities of the country. Member, PSO CSR Trust, Mr Baber Hamid Chaudhary and the Vice President, TCF, Mr. Zia Akhter Abbas, also signed a memorandum of understanding to confirm the support. Senior officials from both sides attended the ceremony.
Speaking at the ceremony, Sheikh Imranul Haque, MD & CEO, PSO said:
“Millions of children in Pakistan remain out of school. This brings a huge responsibility on every one of us to ensure access to education for our children. A well-educated population is important to boost the economy, broaden their outlook, and to ensure a bright future for our country.”
“PSO, as a caring and responsible corporate citizen, has been actively and generously supporting sustainable social and economic development through its extensive philanthropic investment in education, healthcare, community development and disaster relief.”
“We are pleased to join hands with TCF in their mission to remove barriers of class and privilege to make the citizens of Pakistan agents of positive change. Our support to TCF will help hundreds of deserving children from some of the most marginalized communities to remain in school. This is a humble contribution from PSO that always proactively supports the nation through every challenge.”
Mr. Mushtaq Chhapra, Co-founder, TCF said:
“We are extremely grateful to PSO for this generous support that will be benefiting many underprivileged children in the rural communities where these schools are located. It is commendable that how PSO once again has come forward and helped us by providing funds for the yearly operations of the five TCF schools. The support will help more than 1,000 children to continue their education and help in the upliftment of the remote communities of Balochistan and KPK in the process. Education is a slow process and the tangible results cannot be seen immediately. However, the long-term return on this laborious investment is multi-fold. It helps transform not just the life of a child but that of his family as well. It helps them beat the vicious cycle of poverty and make a positive impact by becoming a better citizen.”
“We urge other large corporations to come forward and play their part in creating a more enlightened and educated Pakistan”.