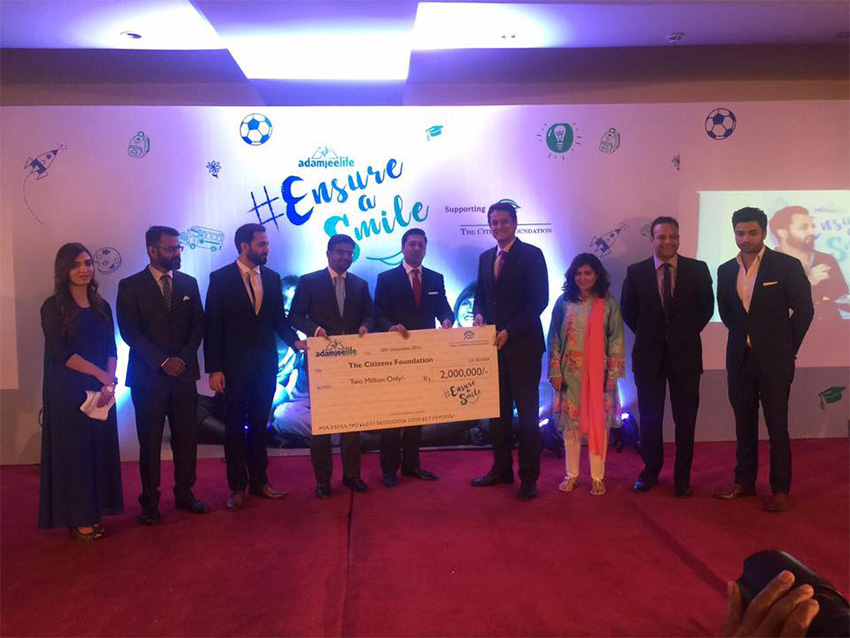 In an initiative to support education for children across Pakistan, Adamjee Life held a fundraising drive for The Citizens Foundation (TCF) through their #EnsureASmile digital campaign.

Adamjee Life introduced the #EnsureASmile digital campaign, in which the company donated PKR 10 to TCF each time the hashtag was retweeted or shared on Twitter and Facebook. Participants were also given the option of uploading their photographs, making the campaign enjoyable and interactive for those taking part in it.

Mr. Jehanzeb Zafar, Chief Strategy Officer at Adamjee Life, said, “This is one of the most unique CSR campaigns any company has undertaken in Pakistan. Approximately 24 million children are out of schools due to various socio-economic factors, and so we have joined hands with TCF to build awareness around this issue. We decided to go with a digital initiative to keep with the times, and ensure that we engage and create awareness both on-ground and amongst the digital audience in the country.”

The campaign went viral on social media, prompting Adamjee Life to also encourage celebrities to get onboard the challenge. Several celebrities participated in the campaign, some of whom include Zhalay Sarhadi, Faysal Quraishi, Sajid Hassan, and Nadia Hussain. Some took part in the Smile Challenge, wherein participants were required to upload a short video clip of themselves describing the campaign and encouraging others to join it.

“We are pleased that Adamjee Life joined hands with TCF as their CSR partner of choice and decided to support our commitment to education. The support for our cause will help ensure smile on the faces of more children who don’t get a chance to see the inside of a classroom otherwise. We ensure that quality of education imparted at our schools inspires these young minds to become future agents of positive change,” said Zia Abbas, Vice President of TCF.