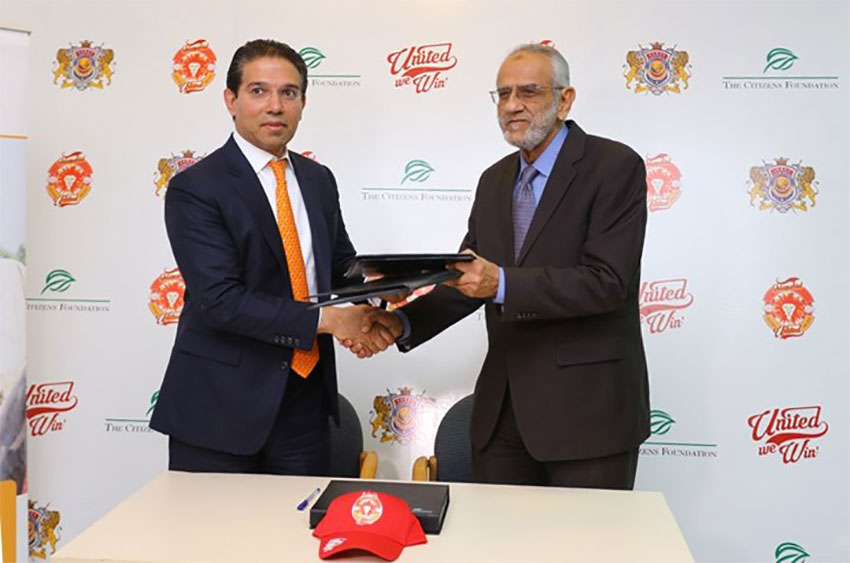 Karachi, 25 January, 2018: The Citizens Foundation (TCF) and Islamabad United have entered into an agreement whereby the latter will provide the goodwill support by creating awareness about TCF’s work in the field of education for the less privileged. Islamabad United will engage its players and current ambassadors to not only visit TCF schools but also highlight the fact that TCF is the largest private network of schools in Pakistan. TCF offers quality education to more than 200,000 less privileged children in it 1,441 schools located in the heart of urban slums and rural communities.
MoUs were signed and exchanged at TCF Headquarters in Karachi to solidify the partnership. On behalf of TCF, Mr. Mushtaq Chhapra, Co-Founder and Director of TCF signed the MoU while Mr. Ali Naqvi, owner of Islamabad United team signed the MoU on behalf of his organization. Islamabad United cricketers and ambassadors will talk about TCF at the cause of education at their various platforms.
Speaking on the occasion, Mr. Mushtaq Chhapra said, “With this initiative, Islamabad United stands united with TCF for education of those children who have limited to no access to quality education. The education emergency in Pakistan remains huge with 40% out of school children. That’s a big figure, the second worst in the world and we feel that we, as a society, need to unite and help these children fight for a better, brighter future. Education is the best chance we can give to our youth the means to become independent, self-sufficient and productive members of the society. We are grateful to Islamabad United for their efforts in supporting TCF’s education movement.  We hope that more organizations would play an active role in supporting TCF and help us get more children into schools.”
TCF was formed in 1995 when six friends in the sprawling metropolis of Karachi decided that this was an unacceptable status-quo. They pooled their resources and funded five professionally designed purpose-built schools in a few slums. And they decided not to stop. Those five schools have gone on to ignite a movement across Pakistan, expanding to 1,441 school units in over 58 districts across Pakistan. The Citizens Foundation, now one of South Asia’s largest nonprofits in formal schooling, has educated boys and girls from some of Pakistan’s poorest, most neglected communities for two decades. But it has done much more than building schools. It has become – along with the 204,000 children it has helped thrive – one of the most uplifting stories coming out of a country reduced to a global symbol of violence and despair.
Talking about the partnership, Mr. Ali Naqvi said, “TCF is doing commendable work in creating education opportunities for the less fortunate children in our society. Islamabad United is a firm believer in empowering our upcoming generation, and education is key to reshaping our society for the better. Hence, TCF became Islamabad United’s cause of choice to support, as a socially responsible organization. We are excited to offer our clout of cricketers and ambassadors to promote the excellent work that is being done by TCF. We have been carrying out events with the organization since our inaugural win first year and plan to come up with integrated campaigns to encourage people to join the TCF education movement and also highlight their contribution to women empowerment.”
Other Publications:
http://khelshel.com.pk/beta/news/1894/1894united-for-education-islamabad-join-hands-with-tcf/
https://pakobserver.net/tcf-iu-enter-agreement-education/