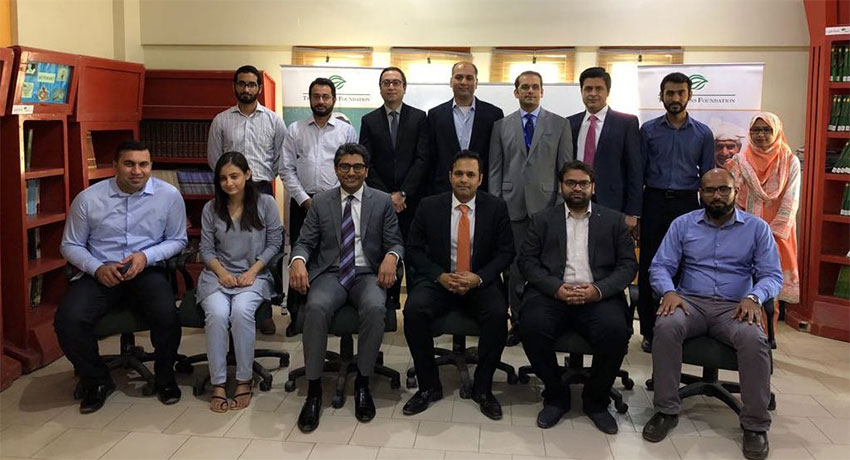 The Citizens Foundation (TCF) has teamed up with the Citi Foundation to implement ‘Critical Employability Skills’ programme, with a $200,000 grant under the bank’s ‘Pathways to Progress’ effort, which aims to prepare and groom college-level students for tertiary education and the job market.

On Wednesday, a delegation of Citi Bank officials and journalists were given a tour of the TCF College — a pilot project launched by TCF in May 2016 to give some of the brightest students of the foundation in Karachi a chance at higher education — by two senior students Amna and Javed.

The guides shared details about their schooling, extra-curricular activities as well as the preparatory classes offered by the college to help them gain admission and improve their prospectus for employment in the long run.

‘The sole purpose was to break barriers of class and privilege’

Giving a media-briefing, head of TCF College Zohaib Sheikh said the college aims to bridge the gap between secondary and tertiary education.

“Students are prepared for entrance exams, as well as given career and admission counselling so that they are able to succeed.”

Talking about the pilot project, he said the sole purpose was to break barriers of class and privilege and gives the TCF students a chance to compete in a highly competitive environment.

Since 1995, TCF Schools have been imparting education to thousands of children across Pakistan.

However, the college was set up one-and-a-half years ago. The college has enrolled 430 students (with a neat breakdown of 52 per cent girls and 48pc boys) from all over Karachi. All these students had done their primary and secondary schooling from TCF Schools and had to go through an admission test.

Mr Sheikh said over 2,000 applications were received for the TCF College which has monthly fee of Rs10,000 per student but more than 90pc students are on scholarships and pay between Rs100-1,000 per month only.

Apart from educational services, the college also has a mandatory 200 hour self-development programme which helps the students in improving their English language skills, build confidence and self-esteem and focuses on developing their interpersonal skills.

Mr Sheikh shared various success stories from the TCF Schools and how education changed their lives. He acknowledged that the positive role models from the school were relatable to the kids and inspired them.

Answering a question of how the students from TCF Schools — who lacked English communication skills due to being taught in Urdu — would fare alongside kids from privileged background, Mr Sheikh said, “We get what we get from schools and we have to work with that.”

“The students here are fast learners and pick on things quickly.”

Head of Marketing and Public Affairs at Citi Bank, Adeel Shahid said the foundation was playing its part in fostering a positive change for the less privileged students.

“Education is the best chance we can give our youth to become independent, self-sufficient and productive members of the society.”

‘Pathways to Progress’ aims to reduce unemployment in the country by enhancing the skill set for entrepreneurship of youngsters between 16-24 years of age, Mr Shahid said.

“By funding this pilot project we aim to make these students entrepreneurs.”