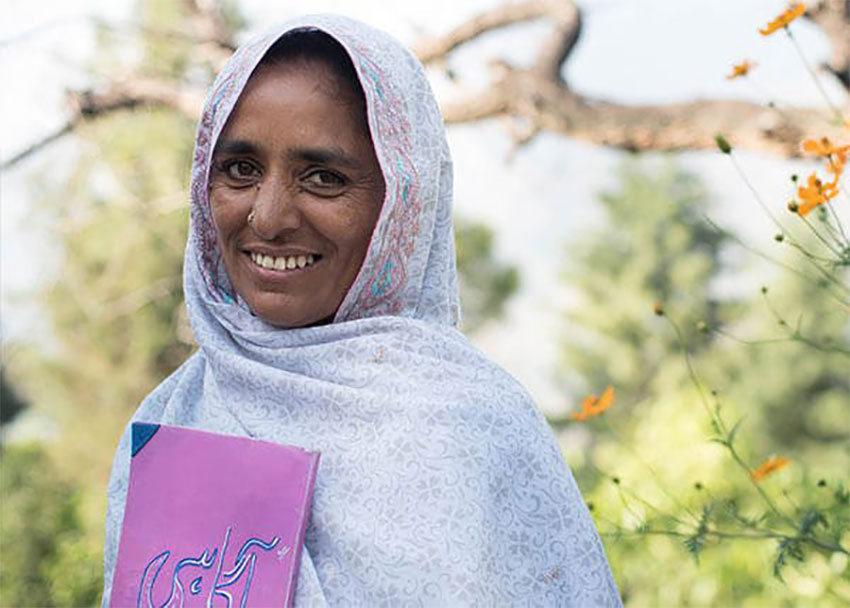 “It was just another morning in Muzaffarabad; I was pregnant with my fourth child, busy getting my chores done, when suddenly the ground seemed to sway one way and the house lurched the other. Instantly I knew that it was an earthquake. I panicked and grabbed my children. Holding them tightly in my arms, rushed out of the house as everything turned into rubble,” recalls Shabana, an Aagahi learner, 13 years after the earthquake shattered her home…her life.

Shabana lost her husband in the disaster and was left alone to raise her children. She was moved to a shelter along with her other relatives who were also going through similar experiences of loved ones dying. Everyone was trying to support their own families. In this moment of complete despair and helplessness, Shabana felt severely constrained with her inability to read. “I, with hundreds of other people, was in need of relief; completely dependent on other people to guide me, about what safety tips to follow, what medicines to give to my children. I was just putting my thumb impressions on every paper they were asking me to,” remembers Shabana.

Eventually things began to settle down and Shabana’s dead city started coming back to life. It was in 2007 that TCF opened its first school in Mansehra and Shabana got her fourth daughter admitted in that school in 2010. “At the time of my daughter’s admission, the Principal not only offered me to work as a school maid but also enrolled me in the Aagahi adult literacy programme. Forty years I’ve been in darkness, but after Aagahi, I was finally reading,” shares Shabana.

Shabana, now wants to raise her children as educated and self sufficient individuals, “In our society those who are educated sit on chairs and those who aren’t sit on the floor. That’s the difference that education makes,” says Shabana.