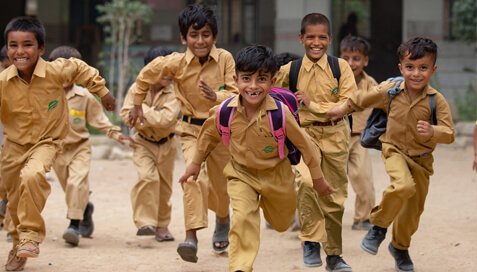 The Directors are pleased to submit their report together with the audited financial statements of The Citizens Foundation for the year ended 30th June 2018.

The Foundation is principally engaged in establishing schools across Pakistan for the less privileged children, giving them support and opportunities they deserve to become productive global citizens. The Foundation receives funds from a broad cross section of society within and outside Pakistan for building and operating primary and secondary schools.

The year under review is a seminal one for the Foundation. As the network grew to 1,482 school units with our student base touching to 220,000; the Foundation found itself ready to take its initiatives and programmes to scale, increasing the impact of its work and reaching out to a greater number of beneficiaries with its strategy 2030, which was duly approved by the Board in May 2018.

The Foundation’s total assets are on a strong footing of 15.4 billion PKR (c 127 million USD). The operating results of the Foundation for the year ended 30th June 2018 reflect a 7% increase in total operating expenses.

The Foundation further improved its compliance to the NPO accounting standard requirements. This has led to scholarships and other community development programmes are now being reflected under donation and expenses. Comparative numbers have also been restated accordingly.

Previously, these were treated directly through the statement of financial position. Furthermore, the Foundation is now duly accounting for the inventories accordingly. Previously, the entire procurement used to be charged off to the Income and Expenditure account.

Additional disclosures have also been made on account of the school network, summary of significant events and transactions, salaries, allocation matrix including impact, sources of donation by origin, and disclosure of interest in other NPOs.

Our vision for the future is to strive for an educated Pakistan. We desire to expand our programmes and build connections which can help change the country’s education landscape. Going forward, the new strategy will guide the Foundation’s efforts to scale its impact over the next twelve years, creating two million agents of positive change by 2030.

The Foundation spent 557 million PKR for the addition in fixed assets under lands and buildings.

The Foundation was able to generate 316 million PKR from operating activities during the year. As at 30th June 2018, the Foundation’s reserves in foreign currency stood at c 15 million USD. Hence, this also resulted in garnering an exchange gain of 121 million PKR.

Cash flow projections are prepared, reviewed and monitored on a regular basis for seamless operations and optimizing returns via effective investment policy as per the approved risk appetite framework.

There is a robust mechanism for evaluating the performance of the Foundation. The Management uses several indicators to assess performance including benchmarking with other NPOs, historical results, economic and compliance situations, grantors and donors funding and other factors.

Budgets are designed to set targets for the management and used to measure progress against actual results periodically, allowing necessary actions to be taken preemptively.

Below are the key risks and uncertainties that are faced by the Foundation, along with the mitigating actions:

The Board approved an appropriation of surplus funds of 593.5 million PKR at the end of the year to be transferred to the General Fund in 2018-19.

No material changes or commitments affecting the financial position of the Foundation have taken place between the end of the financial year and the date of the Report except the appropriation of reserves as mentioned above.

During the year ended 30th June 2018, the Board of Directors has revised the remuneration of Mr. Syed Asaad Ayub Ahmad, Chief Executive Officer (CEO), from 851,710 PKR per month to 919,850 PKR per month effective 1 January 2018. There was no change in other terms and conditions of his appointment. By virtue of being the CEO, Mr. Syed Asaad Ayub Ahmad is deemed to be a Director of the Foundation and is considered as interested in the aforementioned revision of his terms of appointment.

No casual vacancy occurred on the Board during 2017-18. The election of the directors will be held in 2019. Their profiles are included in this Annual Report on pages 48 & 49.

DETAILS OF BOARD MEETINGS HELD OUTSIDE PAKISTAN

During the financial year ended 30 June 2018, six meetings of Board of Directors were held, none of which were held outside Pakistan.

Accountants of Pakistan (ICAP). It is fully compliant with the International Federation of the Accountants’ guideline on code of ethics, as adopted by ICAP.

The Audit Committee and the Board of Directors of the Foundation have endorsed their reappointment for members’ consideration at the forthcoming Annual General Meeting.